Written by Victoria Scialfa on December 21, 2020

“At long last, we have the bipartisan breakthrough the country has needed,” Senate Majority Leader Mitch McConnell, R-Ky., said on the Senate floor Sunday evening.

“As our citizens continue battling the coronavirus this holiday season, they will not be fighting alone,” he added.

McConnell was followed on the floor by Senate Minority Leader Chuck Schumer, D-N.Y., who said: “Make no mistake about it: This agreement is far from perfect. But it will deliver emergency relief to a nation in the throes of a genuine emergency.”

Though both leaders blamed the other side for the package’s months-long delay, Schumer said the deal was forged after “weeks of intense, bipartisan negotiation.”

Among its provisions, the package includes a new round of direct payments to qualifying Americans, worth up to $600 per adult and child; a boost in weekly unemployment benefits; and funds for small-business aid and vaccine distribution.

A bipartisan group of lawmakers, including Sen. Bernie Sanders, I-Vt., and Sen. Josh Hawley, R-Mo., pushed for direct payments, and had sought higher dollar figures. President Trump, who was largely absent in negotiations, insisted on the direct payments as well.

Democratic leaders have emphasized this agreement is a first step that they intend to build on in the new year under the Biden administration.

In a statement Sunday evening, President-elect Joe Biden called the deal “a model for the challenging work ahead for our nation,” promising that the action was “just the beginning. Our work is far from over.”

Democrats had wanted to include sizable aid to state and local governments, an item they had to remove from the final compromise, alongside Republicans’ concession to drop a liability shield to protect businesses against coronavirus-related lawsuits.

The relief bill is moving in parallel with a broader government funding measure. Lawmakers passed, and the president signed, a one-day stop-gap spending bill late Sunday to keep the government funded past midnight. That sets up final votes on the relief package Monday, before it goes to the president’s desk.

If it passes, it would be the first major piece of legislation in response to the coronavirus pandemic since the $2 trillion CARES Act passed in March.

The final sticking point holding up the package centered on a Republican-backed provision led by Sen. Pat Toomey of Pennsylvania that would require the Federal Reserve to seek congressional approval for certain lending authorities.

On Saturday, Toomey argued on the Senate floor that three pandemic-related lending programs should end because they’ve “achieved their purpose.”

But legislators said they reached a compromise on the issue late Saturday, after hours of talks between Toomey and Schumer.

According to a senior Democratic aide, Toomey “agreed to drop the broad language in his proposal that would have prevented the Fed chair from establishing similar facilities in the future to the ones created [by the CARES Act] in March.”

Toomey’s office said in a statement Sunday morning that the “agreement is an unqualified victory for taxpayers,” adding that the deal “will preserve Fed independence and prevent Democrats from hijacking these programs for political and social policy purposes.”

In a call with reporters Sunday, Toomey pushed back on characterizations that his proposal was politically motivated and designed to weaken the Biden administration’s ability to respond to future crises, calling it “completely and utterly false.”

He said his stance on the issue of closing these pandemic-related lending facilities has been consistent since the first drafting of COVID-19 response legislation in the spring.

“I was the guy in March — when I don’t think anybody knew who the next president was going to be — I was arguing that we should have a Sept. 30 close on [these facilities],” Toomey said. “I didn’t get my way on that. I settled for Dec. 31, and that’s what we put in the statute.”

Toomey said he was concerned by an “aggressive effort” from some Democrats “to make the case that these programs don’t end on Dec. 31.” But he acknowledged his initial language on the issue was “too broad” and “might have captured facilities that we didn’t intend to capture.”

“The Toomey legislation was the last significant stumbling block to a bipartisan agreement,” Schumer said on Sunday afternoon.

Both Schumer and McConnell had previously vowed to stay through the Christmas holiday if need be to get a relief measure passed.

Sen. Mark Warner, D-Va., on ABC’s This Week added: “The great news is Congress is not going to be the Grinch. We’re going to get this package done.”

Eviction protections set to expire at the end of the month 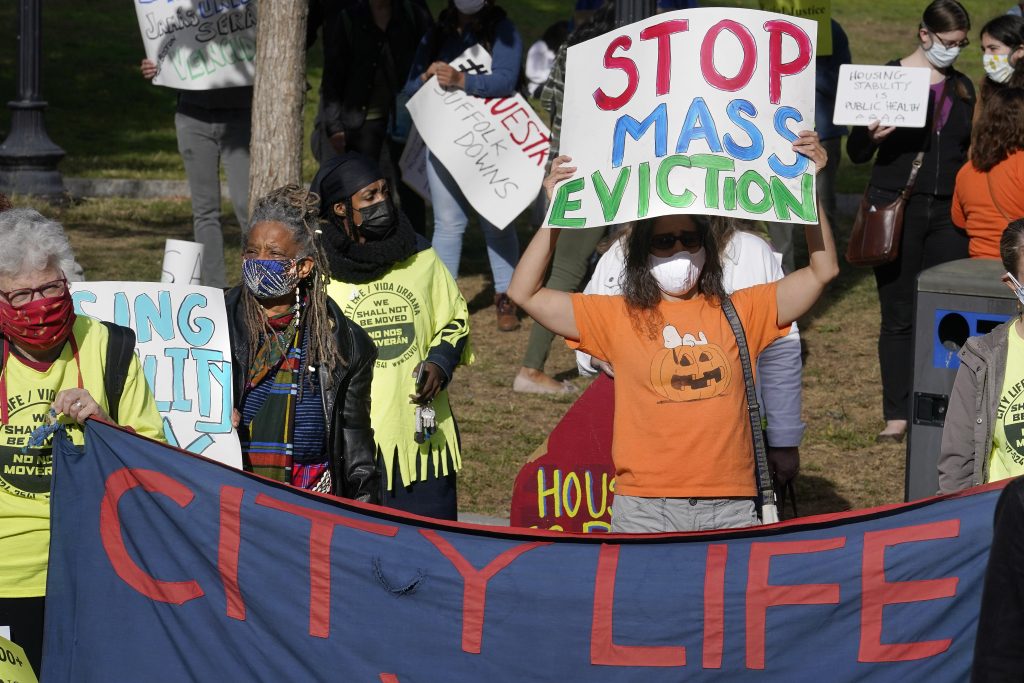