This spring, Pennsylvania voters will see four questions on the May primary ballot. One is focused on the governor’s ability to declare health emergencies, as he has during the pandemic. The state constitution requires the language for ballot questions to be very clear, but opponents say two questions written by the Wolf administration don’t pass the test.

WLVR politics reporter Genesis Ortega spoke with Spotlight PA Deputy Editor Sarah Hughes about her report on the controversy and what’s behind the political divide on the questions.

“And so the General Assembly, which both the House and Senate are majority Republican and run by Republican leadership, have felt basically cut out of the pandemic response. They’ve accused the Wolf administration of making a lot of unilateral decisions: shutting down businesses, putting out orders that they don’t agree with, and they are taking the step to go to the voters and basically say, ‘Should we as the General Assembly have the power to end a disaster declaration without the consent of the governor?’”

“Why are Republicans saying that it’s so confusing? What about the language makes it controversial?”

“When the General Assembly passes these ballot questions they then go to the Department of State which is under the Wolf administration’s purview and the Department of State is the one that writes the actual language that you’ll see on your ballot this May. So, they did that. And when it came out, Republican leadership essentially said this language is written to guarantee that these questions fail. They take issue with some of the language in it.

“So, for example, one of the questions says, should we amend the constitution. It removes an existing check and balance. It says that it increases the power of the General Assembly. It also says that the General Assembly can do this regardless of the severity of the emergency. And so Republicans essentially said, ‘Hey, this language is very loaded. It’s clearly meant to be read as being a negative thing and to bias voters against it.’”

“Wow. Now, what are outside groups saying about all of this?”

“Berwood Yost, who is the director of the Center for Opinion Research at Franklin & Marshall College, is an expert on writing language that doesn’t lead a person one way or another. He  basically gives them the information they need in order to make a decision on their own. And he sided with Republicans. He said that these questions that are written lack context and that there is loaded terminology. It’s not written in a common sense or clear way that would allow voters to know what they’re actually deciding on.”

“Has Gov. Wolf or his administration commented at all on this?”

“They have and they are 100% standing behind the Department of State’s language. I mean, the backdrop to this is that even before the language was released, this was a very, very controversial idea to, in the middle of a pandemic, ending a disaster declaration. There’s also a good amount of disagreement about what this would actually do.”

“That’s actually really good context. I mean, what else did you learn or hear behind the scenes, that didn’t make it into your story?”

“The number one thing, as I said, is just trying to get clarity on what actually would happen if the disaster declaration was ended. Our capitol reporter Cynthia Fernandez spent weeks trying to get that clarity from Republican leadership and didn’t really hear back from them or get a straight answer.

“Amending the constitution is a really big deal. It’s a very long process. It’s very, very hard to undo. There’s just a lot at stake here and not a lot of clarity.”

“It’s been just about two weeks since your story broke. Has anything happened since you published the story?”

“There are outside groups, very prominent political action committees that are putting money behind an effort to get this passed. And otherwise, as I said, the Wolf administration has defended this and they are planning to proceed and election directors are printing their ballots. I mean, people are already voting by mail, so this is essentially a done deal at this point.”

“What happens next? Are we just waiting then to see how the vote comes out on May 18?”

“Yeah, so I am not expecting any surprises at this point. Essentially, the next step is the voters will go to the polls and vote on this and then we should know pretty soon whether or not the constitution is going to be amended to give the General Assembly this power.”

“Great story. Thanks Sarah for speaking with us on your reporting.”

All adults in Pa. are eligible to schedule a vaccine appointment 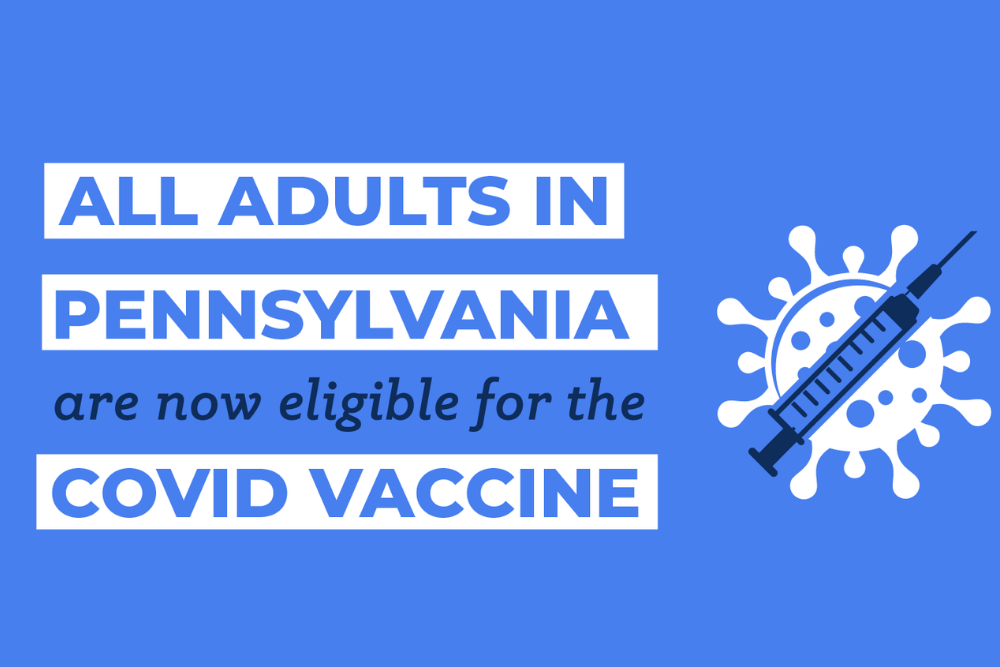